The impact of government subsidies on FDI, versus their effect on economic growth

The analysis that was carried out as part of this project includes foreign direct investments in Macedonia that are operating or under construction, and have received benefits from the state starting from December 2007 in technological industrial development zones and industrial zones. During the period of the research and writing of the publication, 4 foreign investments were identified for which state aid was approved during 2014, but the decisions on state aid are not separately published, but are attached to the granted state aid section of the annual report for 2014 of The Commission for Protection from Competition.

In order to achieve the goals, in a period of 15 months within the framework of the project, ZMAI implemented a series of activities:

– made a survey at the level of the whole of Macedonia, on a representative sample of 1,118 respondents to examine the public opinion on subsidized FDI;

– organized three public tribunes in the regions where SDI operates – Ohrid, Bitola and Shtip and two conferences in Skopje, with the aim of presenting public thoughts and conclusions from relevant speakers, but also with the aim of encouraging public debate by actively involving the audience in the discussions on this topic , which would create better public policies in the future;

– made visits and talks with the management of 4 FDIs in R. Macedonia – beneficiaries of subsidies from the state. In addition, one visit was made to a domestic company that has cooperated with subsidized FDI;

– made quantitative analyzes of the effect of FDI on the Macedonian economy based on econometric models;

– held a conversation with official institutions that are affected in the process of attracting FDI.

Research on the impact of subsidized foreign direct investments on the Macedonian economy is extremely important because the knowledge obtained is a solid basis for further research in this area, but also for the development of specific proposals in the form of public policies that should serve as a guide for the activities in this sphere for the current and future governments. 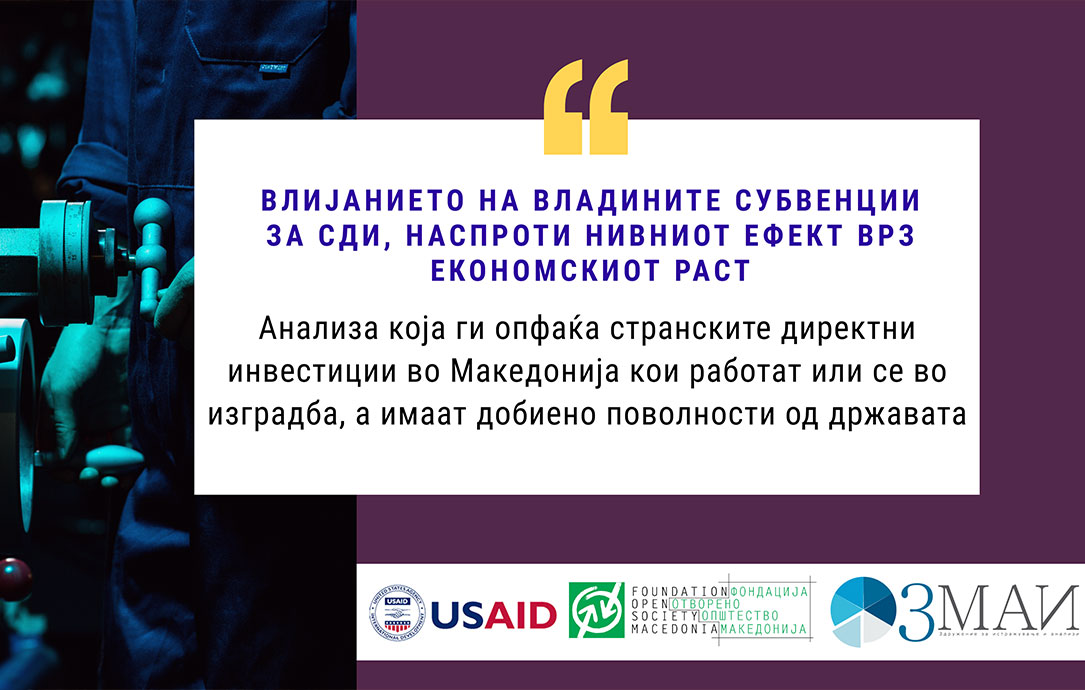